Thank you, (Google) Next 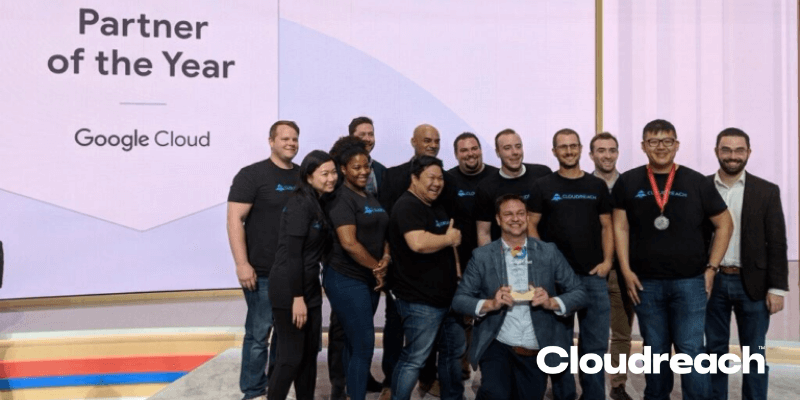 After attending Google Next ’19 in San Francisco, Chris Bunch, Head of Cloudreach – EMEA, takes a moment to think about GCP, the announcement they’ve made, and their potential to change the marketplace.

Another week, another airport…this time it’s San Francisco as I type this whilst waiting for a flight back to a Brexit riddled Britain. I, along with 30 or so other Cloudreachers, have been at Google Next – Google’s annual mega show. For those that haven’t followed the news this week, I thought I’d share some key takeaways

Is this a big deal?

It is, there were approx 35,000 attendees – a mark of how far GCP has come. It’s an interesting mix of partners, developers, and customers – that you don’t really get at other shows, which I find are typically more geared towards a single group. San Francisco and the Moscone centre handle big conferences all the time, and this felt “manageable” in size. It seems like a lifetime ago I wrote about Google Next London and how we were seeing momentum building around GCP – actually it was 2017. I’d say the same rings true here – Google are betting big on cloud and people are taking notice. The energy here was palpable and the announcements were definitely interesting.

Come on then, what announcements?

This was their new CEO’s first big event, and he did a solid job – I’m always impressed by anyone that can speak for a long time without an autocue, well done Thomas. He continued a theme set by Diane Greene of talking about Google being ready for enterprise customers, and confirming they are going to hire a mountain of sellers and supporting folks to make sure they do better here. The war on talent is not cooling down any time soon.

On the tech side, the big announcement was Anthos. I am only marginally exaggerating when I say that every other word in the first keynote was “hybrid” and the other alternating term was “multi-cloud”. Google are taking a bold differentiating step here around being the most “open” cloud and offering a hybrid solution for managing workloads that runs on-premises, in GCP…and on AWS and Azure. This is of course built on Kubernetes, something Google knows more about than anyone else. The Google team tend to build platforms well, so whilst I haven’t seen the control plane properly – I would suspect once they get some user adoption, this will evolve quickly. The concept is sensible enough: a single platform to develop, control and secure your applications – regardless of the underlying infrastructure.

Google have also forged tight partnerships with a selection of vendors (e.g. Elastic, MongoDB) – mainly those frustrated with the other vendors, as they look to position themselves as supportive of open ecosystems, partners and the open source movements.

So, the future is hybrid?

Well, I think we have to concede that cloud adoption is still in its early stages and there is significant demand from customers for solutions that support hybrid deployments – see AzureStack, AWS Outposts and VMWare on AWS for other evidence here. Whilst I am still not 100% convinced of the payback of investing significantly in on-premises, I can see the lure here and we’ll be working with clients on Anthos in the near future, I suspect. I don’t think anyone has really got any meaningful traction yet in this area, but perhaps Google will be the first.

Google will be pushing the “open” message hard and savaging AWS and Azure for “lock-in” I’m sure.

Vertical solutions… Not very exciting, right? Well, it could be, especially if you work in Retail, as Google are going to bundle a whole host of things together in this area and bring it to market as an end to end offering.

For Container fans, Cloud Run also looks interesting – taking a Docker file as input, and handling everything else for you behind the scenes as a Serverless deployment mechanism.

Anthos Migrate is brand new and in Beta – this is technology to migrate from on-premises (or another cloud) directly into Containers. This should work pretty well already as it will have been built on some awesome tech Google acquired when they bought Velostrata last year.

Cloud Data Fusion looks interesting for connecting many complex data sets together and building ETL pipelines, and spreadsheet jockeys will love that Google Sheets can now seamlessly handle billions(!) of lines of data from BigQuery, which is pretty amazing.

There were many other announcements of course, but those are my top picks. For a full list of all the data and ML announcements, see this blog post from a colleague. My favourite was basically a declaration of war on Teradata…

It was. I’m glad I made the long flight from the UK. GCP knows they’re not the market leaders, but they are going all into trying and grow aggressively – and we’re seeing all the signs of that happening. That doesn’t mean AWS and Azure won’t also be hugely successful – they are and will be. The market is so vast, and growing so quickly, all the major vendors are growing well. The concept of differentiating through an open hybrid platform is an interesting one – and this will be a core theme for some years to come.

See you at Next London, later in the year.

P.S. Did I mention we bagged Security Partner of the year? 😉