Blog My Experience On The Cloudreach FastTrack Programme

My Experience On The Cloudreach FastTrack Programme 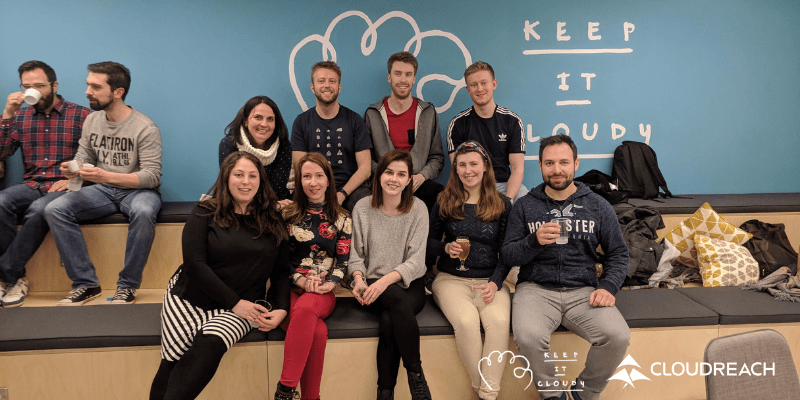 In this post, Cloudreach Cloud Systems Developer, Murray Black, shares his experience of completing the Cloudreach FastTrack to the Cloud Programme in 2018.

My journey with Cloudreach started in March 2018, making my way to the airport through two-feet of Scottish snow. After an interview in January, I found myself moving to London for three months of intensive training on the company’s FastTrack Programme with no idea of what lay ahead of me. This post is the story of the year that I spent as a Cloudreach FastTracker.

A great place to start this story would be with a little background on myself and my previous experience. I am from just outside Edinburgh and have worked north of the border my whole life. Before Cloudreach, I had a career as a manager in retail before I took a life-changing decision to follow my passion and go to study Software Engineering. It turned out to be one of the best decisions of my life.

In my final months of university, I attended a careers day in Edinburgh where various companies were trying to woo the smartest graduates from the area. During my time talking to the various representatives there, I met some Cloudreachers who told me about the company, the culture and the kind of projects they work on. I knew, there and then, that this was the company I wanted to work for and applied for the graduate scheme not long after. The rest, as they say, is history.

Fast forward through the interview process (which isn’t your normal interview process by the way) to the 5th of March and I’m standing in the reception of the Cloudreach London office for the second time in my life. This time as an employee. I met my first fellow FastTracker that morning and we immediately became fast friends. All the nerves of starting a new job in a new city disappeared and I started to relax. She was from a networking background and didn’t have a lot of experience in cloud technology, but what she lacked for in experience she made up for in enthusiasm. I knew I was in the right company.

We were welcomed by a member of the Employee Engagement team who introduced us to the rest of the FastTrackers that I would spend the next few months of my life with. We introduced ourselves via some fun ice-breakers and I started to get an idea of how varied our paths the programme had been. There were a few university graduates, a few from academia, a strategic planner, a musician and a software developer. Each from different backgrounds and different walks of life but everyone brought the same enthusiasm and passion to learn new things and work with cool technology.

After introductions, we met the office manager who gave us our swag. Like kids at Christmas, we opened our new MacBook Pros, phones, backpacks and water bottles (and stickers – everybody loves stickers!). We played with our new “toys” until lunch. Boxes of pizza were waiting for us, which we quickly learned was another perk of being a new-starter. Everybody congregated in the kitchen area to welcome us, share a slice and have a chat. The rest of the day consisted of setting up our devices and getting access to platforms that were crucial to our work and meeting new people. Not a bad first day!

Tuesday to Thursday of that week was Cloudy Roots. What is Cloudy Roots? Held on the first week of each month, Roots aims to bring together all the recent new starters, introduce them to various parts of the business, the people within it, ways of working and company culture. Presentations are interspersed with ice-breaking sessions and drawing on the walls (we designed the next iteration of the chair – a million dollar idea!). I’m really not selling it here though… But it was a really fun way to learn a lot about the business and network with new starters who were not on the FastTrack and working in entirely different areas of the business. In the middle of Roots week, we were treated to an evening at the Counting House pub, the birthplace of Cloudreach! A pie and a pint awaited and we got to unwind with our new colleagues.

On Friday I enjoyed my first Cloudy Lunch. Yet another perk, cloudy lunch is where Cloudreachers invade several local restaurants (picked by members of the team, that differ each week). A message is sent out to everybody and you select which restaurant you want to go to, and what you would like to eat. The idea behind Cloudy Lunch is that you get to meet new people each week, eat and chat with them, and build relationships that you wouldn’t get to make on normal day-to-day business.

That first week was full-on, but a lot of fun. Every day was different and exciting and I always enjoy meeting people, learning something new or doing something different! No two days were the same and we even managed to visit the local pub a few times at the end of a long day. It was refreshing to find myself at a company which is so focused on providing a good environment for its employees to thrive in.

After the first week of inductions, we started on sprints to cover technologies that we will be using on a daily basis. Over the course of the next three months, we had one or two-week sprints covering technologies like AWS, GCP, Azure, CHEF, Sceptre, Python, Jenkins and other technologies that we are likely to use when on customer engagements. Each sprint was taken by a different teacher and presented its own challenges. Some evenings we would be mentally exhausted from learning a ton of new things, others we would end the day on a high from solving a problem or a bug that had been an issue for a while. Most nights we would visit the pub to reward ourselves for the hard work.

Normal day-to-day working life consisted of a walk to the office in the morning, grabbing something to eat on the walk. Once in the office I would grab some fruit and a yoghurt for my day and settle down with whoever was eating breakfast for a chat. After breakfast we would move into one of the meeting rooms and start our sprint, this would lead us up to lunch.

Lunchtimes (when not on a pizza-Monday) in the office usually consisted of trips to Leather Lane food market. This is where I found some of the best food I have had in London. Korean Bibimbap, BBQ pork, Burritos, Indian Tikka wraps, Pho noodle soup… Food from every corner of the globe is literally a two-minute walk from the office!

The final sprint of the FastTrack was a challenge sprint where we got to put to test all the skills and experience we had gathered over the previous sprints.

During these three months, we not only learned a ton of new soft and technical skills but we built new relationships. Many visits to the pub after work brought us together as friends. We attended food markets and restaurants for dinners and even did a salsa class as a group. It was a really fun and challenging period of my life, and it would never have been possible without Cloudreach and my amazing fast-track colleagues.

After the fast track finished I was due to return north to the Edinburgh office but I had a few weeks left on the lease for my accommodation and wanted to prolong my stay in London as much as possible. I organised to stay for those final weeks and during my time waiting to be placed on an engagement, I chose to push myself for my professional certifications. I had worked hard the previous months and wanted the cloud certifications to demonstrate and validate the technical knowledge and skills that I had developed.

Whilst working on my certifications I also had conversations about potential projects. I was asked what type of engagement I’d like to work on, what I thought my strengths were, how much travel I’d like to do etc. and the resourcing team tried to match me to an engagement. After a short period of time, I was placed onto a London project with one of Cloudreach’s larger clients. The engagement required me to visit the client site once a month while the rest of the time was spent working remotely from Edinburgh.

This new project was exactly what I had hoped for. The chance to get some hands-on experience with a large project whilst still being based in our awesome Edinburgh office (best in the fleet). I worked with some technologies that we had covered in the FastTrack, some that I had worked with in University and some completely new tech that I had to learn whilst on the job. My biggest achievement on the project was being the solo engineer on an anti-virus epic which we successfully deployed and tested into production before I moved on to a new engagement.

This brings us up to date! Minus a few (small) details, like the FY19 Kick-Off trip to Cancun(where the company flew everybody out to Mexico for an internal conference). The past year has flown by and I have grown immeasurably as a person, developing my technical knowledge and experience and also honing my personal and soft skills. Who knows what will happen in the next 12 months, but I’m very excited for what the future holds, learning new skills, meeting new people and working in new places!