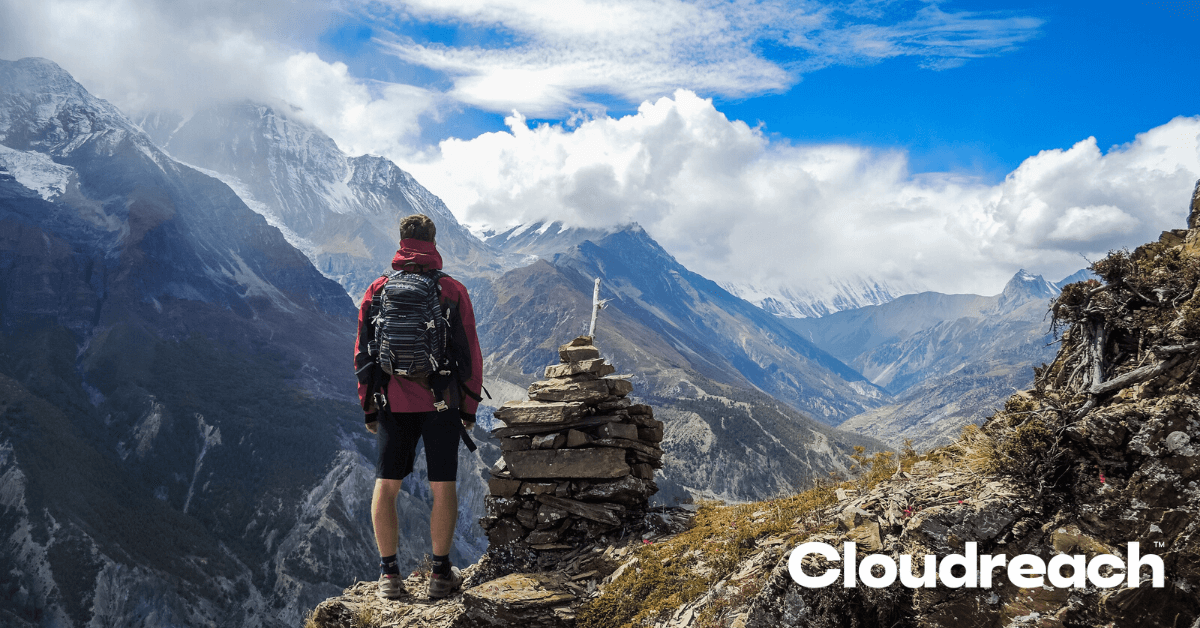 In this post, Cloud Architect, Tim Perry, suggests that we are ‘crossing the chasm’ of cloud adoption and approaching a boom in cloud consumption.

Let’s face it. The cloud is here to stay.

We are still seeing the cloud adoption trend continue to grow.

I won’t delve too much into the statistics as there are plenty to be found on the internet that supports this. However, I believe we are at a critical point in history. We live in an age of information that is increasingly becoming more distributed thanks to the advent of cloud computing.

We are at the precipice, or even ‘crossing the chasm’ (a term coined by Geoffrey Moore), of cloud adoption as it reaches critical mass.

Let’s look at some context.

When we consider the adoption of technology, we know that some are market-defining, revolutionary innovations and the vast majority fail to make an impact and are ultimately forgotten by history.  The Theory (or law) of Diffusions of Innovations, is ‘a theory that seeks to explain how, why, and at what rate new ideas and technology spread.’

It’s also known as the Technology Adoption Lifecycle, which has a more discrete definition:

“…a sociological model that describes the adoption or acceptance of a new product or innovation, according to the demographic and psychological characteristics of defined adopter groups.”. 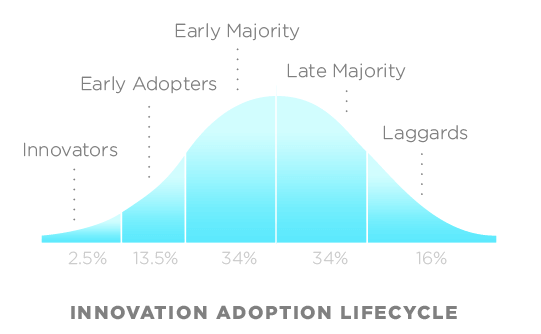 ‘Innovators’ are the ones that truly believe in the adoption of new technology. These people are passionate about seeing innovation make its way onto centre-stage. These people can be found queuing for hours-on-end outside an Apple store for the latest iPhone despite knowing they can easily walk in later that day and still manage to grab hold of one. For any technology to progress its way into the market, it needs roughly 2.5% of these innovators to adopt it.

However, it is widely agreed that it is the next group, the ‘Early Adopters’, that are responsible for driving progress towards the critical mass. It is usually at this point in the lifecycle that technology either makes it or breaks it.

The ‘Early adopters’ are also the group that forms the ‘chasm’ that every new product/technology is faced with in order to successfully capture a segment of the market. To cross this chasm, the theory demonstrates that it takes at least an average of 13.5% of this adopter group. Once a company breaches this golden threshold, the ‘Early Majority’ and the ‘Late Majority’ typically follow in quick succession and eventually the rest of the ‘Laggards’.

Applying the Law of Diffusions of innovations

If we were to apply the same adoption lifecycle model to the uptake of cloud today, we would find ourselves within the transition period from ‘Early Adopters’ to ‘Early Majority’ or even well into the Early Majority, depending on who you ask.

Either way, we are beginning to see the crossing of the chasm.

This presents an interesting opportunity for organisations that have been largely risk-averse to adopting the cloud for their next project or transformation program. As the ‘early majority’ manifests, there comes along with it, an increasing amount of data, use-cases, and experience in the industry that will help fuel growth in the already jet-powered consumption of public cloud services.

Despite this growth, there is still a strong amount of uncertainty across organisations looking at the cloud. There is still hesitation; ‘cloud is more expensive’, ‘we don’t have the capabilities’, ‘we’re not confident with security’ and ‘we don’t understand the value-add’.

History appears to be repeating itself

Let’s rewind to the late 19th century where the technological status quo of transportation methods is proliferated by the horse (and carriage, if you could afford one).

I’m sure we are all familiar with the increasingly debated quote by Henry Ford in the context of the advent of the car:

“If I had asked people what they wanted, they would have said faster horses.”  – Henry Ford

I’m not here to debate whether Ford actually said those exact words but rather pander the idea that there most certainly would have been groups with that way of thinking.

With the introduction of the car, came the introduction of increased capital and maintenance costs. It was no longer just about feeding your horse. You now needed to pay for fuel and were severely limited by how far you could go. Parts needed to be replaced as they wore and tore. The new speeds presented new challenges such as bespoke headwear to protect from insects flying into your face.

Back to the future, organisations still view the adoption of cloud in the same light. There are challenges that they are averse to surmounting, namely, increased costs, training & tooling, lack of resources, as well as additional overheads in governance and compliance.

Sadly, these challenges get in the way of understanding the value-add that the cloud brings and I believe this is largely down to ‘mindsets’ or ‘ways of thinking’.

Let’s go back to the car analogy. People were averse to the idea of adopting a car in place of their reliable workhorse due to the typical challenges I mentioned earlier. What these people lacked, was the vision or foresight to understand the value of the car that would eventually materialise.

The car eventually brought new agility that permeated every aspect of our world (that was unrealised at the time):

In the same way, cloud is bringing newfound agility. For example:

But these are just some of the obvious ones, it’s the (yet) unrealised customer value and business opportunities that will materialise once an organisation has adopted the use of cloud.

To combat this challenge, Forrester has compiled a few studies that explore what they call the ‘total economic impact’ of the use of cloud. For example in this whitepaper, Forrester demonstrates the economic value of the use of Microsoft Azure PaaS by a ‘composite’ multi-national organisation (based on Microsoft’s current customers at the time).

A snippet of the study below demonstrates the unrealised potential of moving to the cloud by pre-empting innovation in areas other than the ones that generate sales/revenue:

“Readers should examine their sales opportunities as an obvious source of new revenue, but they should also consider other departments. For example, an HR application might improve hiring processes, or an app focused on a supply chain or manufacturing process might speed up delivery or assembly and improve quality.

Any of these apps could deliver better and faster information to executives, leading to better decisions and more opportunities, such as hiring more-qualified people, expanding scale to more users, opening up new geographies, and deploying additional applications to unlock even greater benefits.”

As you can see, there is more to the cloud than benefits realised on the surface. There is an iceberg of opportunity waiting to be discovered and converted into value.

The more businesses begin to understand this, the more cloud consumption goes up. As public cloud providers generate more revenue, the more they continue to improve & innovate their own cloud products and ultimately enable and empower businesses to achieve more. 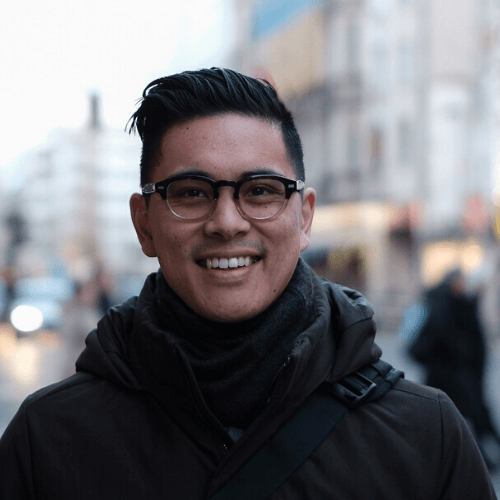